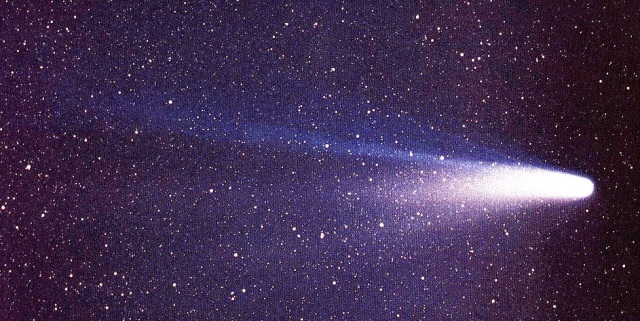 Since the beginning of time, outer space has been of immense curiosity for mankind and has captivated human minds for centuries. Comets over the years have contributed to this liking for space of mankind’s which can be seen by the fact that comets sighted decades earlier are still studied and are held us in awe.

A comet, basically, is an icy body that releases gas or dust. They are often compared to dirty snowballs, though recent research has led some scientists to call them snowy dirtballs. Comets contain dust, ice, carbon dioxide, ammonia, methane and more. Astronomers think comets are leftovers from the gas, dust, ice and rocks that initially formed the solar system about 4.6 billion years ago.

One such comet is the Halley’s comet, one of the most famous comet in our history. It is a periodic comet, and it returns to Earth’s vicinity about every 75 years, making it possible for a human to see it, at most, twice in his or her lifetime. The last time it was here was in 1986, and it is projected to return in 2061. Appearance of the Halley’s comet can be traced back to as early as 239 B.C when it was sighted in China.

The comet is named after the English astronomer Edmond Halley who examined reports of a comet approaching Earth in 1531, 1607 and 1682. He concluded that these three comets were actually the same comet returning over and over again, and he predicted the comet would come again in 1758.

Human being are a curious specie and comets such as Halley add to our curiosity for space. Anything which man cannot understand will always make mankind pursue it for better understanding till they have either understood it or conquered it. Till then space will keep human attention.

All That’s in Store for You!